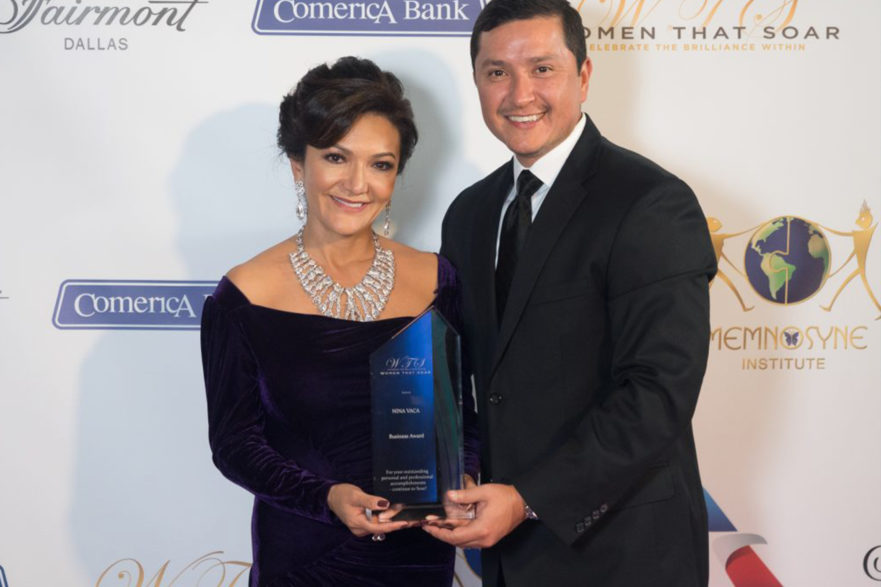 Each year the Women that Soar (WTS) Awards Ceremony honors a diverse group of global female leaders who have soared to success. This year Vaca was presented the Women That Soar Business Award by news anchor Palmira Pérez and Pinnacle Group’s President of Talent Solutions Freddy Vaca.

Held in Vaca’s hometown of Dallas, Texas, the star-studded 2016 Women that Soar Awards ceremony was hosted by Entertainment Tonight’s Kevin Frazier and comedian Heather McDonald. The ceremony featured performances from artists including Grammy-nominated artist and fellow 2016 WTS Award winner Wynonna Judd and award-winning R&B group En Vogue. The awards ceremony will be produced by industry-leading executives and televised during prime time in select markets on December 11, 2016.

“Nina Vaca is a brilliant entrepreneur who works tirelessly to inspire other women to soar,” says Gina Grant, founder and CEO of Women That Soar. “In addition to establishing herself as the founder and owner of a successful business, Nina travels around the world as a Presidential Ambassador for Global Entrepreneurship inspiring women to pursue their own success through entrepreneurship and business. She also serves on the boards of three Fortune 1000 companies and actively mentors upcoming female leaders. With a personal goal to be ‘crazy good’, Nina exemplifies what it means to be a Woman Who is Soaring.”

“I am humbled to be honored by Women That Soar alongside such amazing woman that I respect and admire,” said Vaca, “We have a debt of gratitude to Gina Grant founder of Women That Soar for her continued passion to celebrate the contributions woman are making around the world”